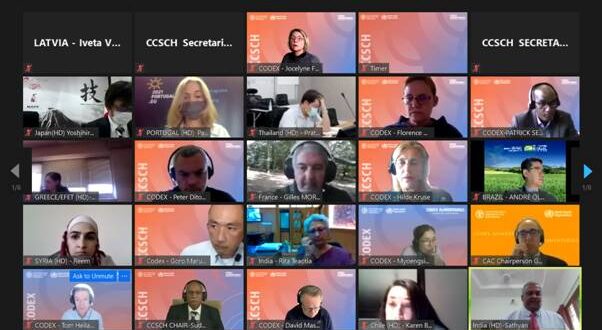 The Codex Committee on Spices and Culinary Herbs (CCSCH) has finalised and recommended quality standards for four spices; cloves, oregano, basil, and ginger, during its fifth session held virtually from 20th -29th April 2021. The committee forwarded these four new standards to the Codex Alimentarius Commission (CAC) for adoption at final step 8, as full -fledged Codex standards.

In this session, CCSCH5 unanimously agreed to forward the following four draft standards to Codex Alimentarius Commission for final adoption as Codex standards:  dried / dehydrated forms of cloves, oregano, basil and ginger.  These standards will shortly join the ranks of the other four standards adopted earlier, to form a body of reference for world spice trade and for member countries to align their national regulations.

The committee also took up the following new work items: to develop Codex standards for small cardamom and turmeric, and to develop the first group standard for spices that fall under the class ‘dried fruits and berries’.  This grouping approach, on a large scale enough to meet the demands for spices and herbs, will be a pioneering effort by this committee that might result in considerably reducing the time required for finalizing the standards of individual spices.Many practical aspects and best practices evolved out of this session; these are expected to help other host countries in the Codex fraternity to organize future Codex committee sessions efficiently.

This time, owing to the covid-19 pandemic the 5th session of the committee was organized in virtual mode, for the first time.

‘India blazed a new trail for technical conferences under Codex with this virtual session, as this was the first ever Codex Commodity Committee meeting held virtually,’ said Shri D. Sathyan IFS, Secretary, Spices Board.  ‘Being the organizing secretariat of CCSCH, Spices Board India is very happy that the latest session has brought in an unprecedented success by finalizing standards for 4 more spices.   Also, the present session of CCSCH  witnessed the highest participation ever with 275 participants from 65 member countries, one member organization (European Union) and 11 international observer organizations.’

CCSCH is the youngest of the Codex Commodity Committees. The Committee is Chaired by India and Spices Board India is its Secretariat.  This committee is mandated to elaborate worldwide, science-based quality standards for spices and culinary herbs, in accordance with the Codex principles of consumer protection and fair trade practices. Dr M.R. Sudharshan is the current Chairman of the Committee.  Normally the Committee meetings are held once in 18 months.  The Last meeting of CCSCH was conducted in 2019 at Trivandrum. In its past four sessions, the committee developed and finalized Codex standards for four spices, viz. dried or dehydrated forms of  black/white/green pepper, cumin, thyme, and garlic.

To develop and expand worldwide standards for spices and culinary herbs, and to consult with other international organisations in the standards development process CCSCH was formed in 2013 with support of more than a hundred countries with India as the host country and Spices Board as the Secretariat for organising the sessions of the committee. Since its inception, the Codex Committee on Spices and Culinary Herbs has been successful in developing harmonised global Codex standards for spices and herbs.

Set up in 1963, the Codex Alimentarius Commission (CAC) is an intergovernmental body established jointly by the UN’s Food and Agriculture Organisation (FAO) and the World Health Organisation (WHO), within the framework of the Joint Food Standards Programme to protect the health of consumers and ensure fair practices in the food trade.