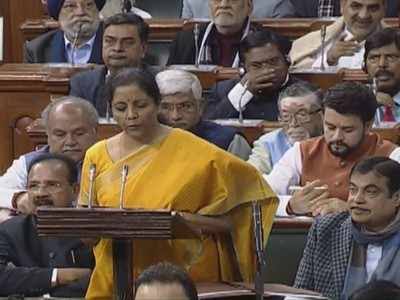 The Union Minister for Finance & Corporate Affairs, Nirmala Sitharaman, has said that entrepreneurship has always been the strength of India and our young men and women have been contributing to India’s growth with their entrepreneurial skills. She was presenting the Union Budget 2020-21, in Parliament, today. We recognise the knowledge, skills and risktaking capabilities of our youth and they are no longer job seekers but they are job creators, she added.

The Finance Minister proposed setting up of an Investment Clearance Cell that will provide “end to end” facilitation and support to create more opportunities to youth and remove roadblocks. She also proposed to develop five new smart cities in collaboration with States in PPP mode and such sites would be chosen that offer the best choices in terms of aforementioned principles.

In order to incentivise the investment by the Sovereign Wealth Fund of foreign governments in the priority sectors, Nirmala Sitharaman proposed to grant 100% tax exemption to their interest, dividend and capital gains income in respect of investment made in infrastructure and other notified sectors before 31stMarch, 2024 and with a minimum lock-in period of 3 years.Tomake available foreign funds at a lower cost, she also proposed to extend the period of concessional withholding rate of 5% under section 194LC for interest payment to non-residents in respect of moneys borrowed and bonds issued up to 30thJune, 2023. The Finance Minister proposed to extend the period up to 30thJune, 2023 for lower rate of withholding of 5% under section 194LD for interest payment to Foreign Portfolio Investors (FPIs) and Qualified Foreign Investors (QFIs) in respect of bonds issued by Indian companies and government securities.

The Finance Minister proposed to further consolidate the gains in order to make India more attractive Foreign Direct Investment (FDI), destination. She said the Government will examine suggestions of further opening up of FDI in aviation, media and insurance sectors in consultation with all stakeholders. 100 % FDI will be permitted for insurance intermediaries and local sourcing norms will be eased for FDI in single brand retail sector.

Growing inflows of FDI rebounding of portfolio flows from net outflow to net inflow and receipt of robust remittances, all showing up in higher accretion of foreign exchange reserves, which as on end December, 2019 stood at USD 457.5 billion. Net FDI inflows have continued to be buoyant in 2019-20 (April – November) attracting USD 24.4 billion as against USD 21.2 billion, which is a reflection of a global sentiment that increasingly believes in India’s growth story and reform measure being undertaken by the Government.

Nirmala Sitharamansaid that India needs to manufacture networked products that will make it apart of global value chains. This in turn gets more investment and generates more employment for youth. She further said that electronics manufacturing industry is very competitive and the potential in job creation is immense. She further said that India needs to boost domestic manufacturing and attract large investments in the electronics value chain. She proposed a scheme to encourage manufacture of mobile phones, electronic equipment and semi-conductor packaging.

In order to support footwear and furniture manufacturing which come under the MSME sector the Union Minister for Finance & Corporate Affairs, Nirmala Sitharaman announced that customs duty is being raised on items like footwear (from 25% to 35% on footwear and from 15% to 20% on parts of footwear) and furniture (from 20% to 25%). Shesaid that special attention has been given to put measured restraint on import of those items which are being produced by our MSMEs with better quality. She stressed that labour intensive sectors in MSME are critical for employment generation. Cheap and low quality imports are an impediment to their growth, the Finance Minister said.

To achieve the twin objectives of giving impetus to the domestic medical equipment industry and also to generate resource for health services, the Finance Minister proposed to impose a nominal health cess (at the rate of 5%), by way of a duty of customs, on the imports of medical equipment keeping in view that these goods are now being significantly made in India. The proceeds from this cess shall be used for creating infrastructure for health services in the aspirational districts, SmtSitharaman said.

She referred the Prime Minister’s call from Red Fort about quality and standards when he spoke of “Zero Defect-Zero Effect” manufacturing. All Ministries, during the course of this year, would be issuing quality standard orders, she added.It is the vision of the Prime Minister that each District should develop as an export hub.

Efforts of the Centre and State governments are being synergised and institutional mechanisms are being created.

Share, if you care !!
2020-02-02
ppb
Previous: National Logistics Policy will be Released Soon
Next: FM Announces NIRVIK Scheme for Exporters in Union Budget 2020-21

TheMinister of Commerce and Industry Shri Piyush Goyal has said that India and Japan are ...