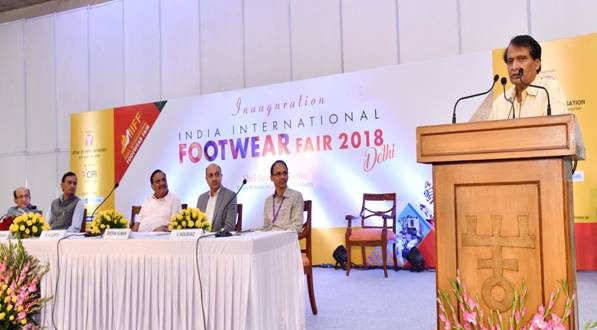 Indian footwear Industry has a huge potential for export and employment generation said Union Minister of Commerce & Industry and Civil Aviation. He was speaking at the inaugural programme of the 4th India International Footwear Fair 2018 (IIFF) at PragatiMaidan in New Delhi today. India will soon become a global hub for manufacturing of footwear to cater to growing demand. The government of Indiais formulating a strategy for greater coordination with States as well as trade bodies for global promotion of India’s footwear industry.

The Minister emphasized that the Indian footwear industry has to look beyond the domestic market as India has potential to become a global footwear manufacturing hub. To Realise this a special package of ₹ 2600 crore was approved by the Government for employment generation in leather and footwear sectors last year. The package comprises of implementation of central scheme:Indian Footwear, Leather & Accessories Development Programme.

Efforts are being made to boost India’s leather and footwear trade to new markets in African countries.  This will help India to become a part of global supplychain.The Minister assured that Government of India will extend all possible support to the footwear industry.Suresh Prabhu took a round of the fair and evinced keen interest in a wide range of products including footwear, machinery, equipment, technology, accessories, components and chemicals.

The event has been organized by India Trade Promotion Organization in collaboration with the Confederation of Indian Footwear Industries and support of the Council for Leather Exports, Central Leather Research Institute (CLRI) and Indian Footwear Components of Manufacturers Association.

During the inaugural programme,Chairman and MD, ITPO, and other senior officers were present.